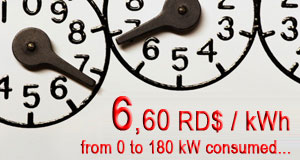 The Superintendence of Electricity (SIE), announced today a substantial reduction in the electricity tariff starting in September in Las Terrenas, it sets the beginning of a new stage of growth with access to lower prices for electricity service to promote economic development and tourism in that area of ​​the country.

Diogenes Rodriguez Grullón, a trustee and Superintendent of Electricity in office, said President Danilo Medina concerned with the high price of electricity in Las Terrenas, provided for the interconnection of the Luz y Fuerza to the National Interconnected Electric System (SENI), at a cost of 180 million pesos, to ensure best prices in the kilowatt / hour to the residents of this tourist region.

Rodriguez Grullon made ​​the remarks during a press conference he gave here to publicize community representatives, businessmen and public officials to organizations, the progress made by the interconnection project at SENI network of electricity distribution company Luz y Fuerza of Las Terrenas.

He also reported that, to ensure the success of this initiative, the SIE engaged the services of an international firm determination to study technical rate for the Luz y Fuerza of Las Terrenas.

He pointed out that as a result of these studies, SIE ordered the interconnection of Luz y Fuerza Las Terrenas from August 6 through resolution SIE- 047-2015, which also established a transitional basis , and until that the bidding process for the purchase of electricity, Luz y Fuerza Las Terrenas remove its entire electricity demand spot market is complete. (Definition of spot: Market in which transactions occur in cash and delivery is immediate).

I am pleased to share with you the idea that, for this community begins a new stage of growth, because of access to lower prices for vital services such as electricity, to promote economic development, as of now we anticipate growth of tourism and all the services offered in this region, said Rodriguez Grullón: Congratulations here comes a stage of progress for Las Terrenas.

SIE explain also issued another resolution, the SIE-048-2015, which established a transitional scheme applicable turnover in August. He added that with this resolution the regulator define how to bill for the month of August in the governing two tariffs, the latest issued by Luz y Fuerza of Las Terrenas, which was valid until the day of interconnection, and incurred as a SENI interconnection with the energy withdrawals spot market and calculated by the Superintendency.

Grullón Rodriguez explained that as a result of the transitional billing scheme, users of Las Terrenas now have a significant decrease in their bills in the month of August bills in September and subsequent months – emphasized the Superintendent of Electricity in functions, they appreciate significant declines, the most favored low-income customers who consume less than 180 kilowatt / hour per month.

He stressed that the measure will benefit users who previously paid per kilowatt-hour at about twenty pesos and that from September they will pay less than seven pesos. All other customers will receive reductions in their bills that vary between 30 and 40%, depending on their consumption levels, which placed the rate about thirteen pesos, meant the official.

He said that to improve service to users of the public electricity service, the Superintendency opened in Las Terrenas office of Consumer Protection (PROTECOM), which said it is properly equipped to handle the demands of the customers in order to reduce conflicts that arise with the service provider.

Moreover, the Acting Superintendent of Electricity, Grullón Rodriguez warned that this institution supported by other state agencies will monitor compliance with the General Electricity Law as it pertains to security of supply and interconnection facilities, specifically the protection of the interconnection line, substation, distribution networks and low voltage.

He recalled that Article 124 of the General Electricity Law qualifies as endangering the security of the national electricity system any attempt to destroy, disable or damage power lines, networks, substations, power plants, measuring equipment, wiring or any of its components in order to paralyze or disrupt the Service or partial power or collectively to the detriment of citizens and the country.

He argued that the person or persons who are caught in one of the above actions “will be charged with endangering the security of the national electricity system and will be punishable by three to ten years in prison and a fine of fifty to 200 minimal salaries.

Rodriguez Grullón said that after the interconnection SENI networks Luz y Fuerza of Las Terrenas the service has been interrupted several times, one of these was noon Friday because of a palm tree that fell on a line of Light and Power; then he failed for lack of coordination of protection against over-currents in networks, in both cases the service was restored relatively quickly.

Meanwhile, the official recommended to users of the public electricity service in Las Terrenas pay on time to avoid service suspension and hateful reconnection charges.

He said that in case they have any complaints about the service or the invoice submitted by concessionaire, users have to make the claim as required by the rules, first to the company, and if this does not give a satisfactory answer in ten days working, then take your complaint to PROTECOM where it will be analyzed and processed and given a reply within ten days.

The Superintendent expects quality service and improve customer-company relationships in the community of Las Terrenas, Grullón said Rodriguez, who at the same time ensured that the Consumer Protection Office is always available to help resolve any differences arising between the parties.

He thanked President Danilo Medina for concern in solving the problem of electricity supply from Las Terrenas, since as he said, it was thanks to the instructions given by the president to EDENORTE, which has come to fruition this interconnection benefits all residents of this community.

He took the opportunity to thank the community of Las Terrenas for the support that is manifesting, the decisions taken by the government to get electric service comes to them at a lower price from September.