The absence of short-term solutions tarnishes the process of resolution 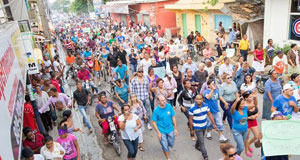 After years of abuse by Luz y Fuerza and the constant denial of justice by the Superintendencia de Electricidad (SIE) it is difficult to have confidence in the proceedings of the government agency in charge of regulating electrical service in the country. During recent discussions on a deal to stop the strike, the SIE could not ensure low long-term costs, nor significant long-term results. So we took our plight directly to President Danilo Medina, especially because everything related to the SIE is a tear-soaked loin cloth of vulgar and inexcusable denials of justice. The President hasn’t answered.

Las Terrenas has not received the benefits of the subsidy benefiting the rest of the country. It is not fair that after the crisis of a couple of weeks ago, no authority would recognize the validity of the claims made by protesters and strikers, claims that would help in reducing immediately the high costs of electricity for everyone. Failure to respond to their petitions constitutes, once more, a painful and irresponsible denial of justice.

It is frustrating to live a few kilometers away from communities that pay less than half the kilowatt, while residents of Las Terrenas have to put up with the most expensive kilowatt of energy in the country and one of the highest in the world. In the municipalities of Samaná and Sanchez the kilowatt costs between 4.4 and 8.2 pesos paid while in Las Terrenas it is paid between 18 and 22 pesos. That is fundamentally unfair and a violation of the human rights of each resident, national or foreign. This violation of human rights is compounded by the fact that such high expense is also partially responsible for the highest cost of living in the town, applied to rentals, consumer goods, transportation, entertainment, running a business and everything else ! Unless, of course, if you’ve made a special arrangement directly with Orsini Bosch, in which case the rest of us subsidizes your convenient contract in dollars.

Las Terrenas does not expect overnight miracles, just the due attention it deserves after twenty long years of oppression by Luz y Fuerza and by a total and undeniable government sloth. No traditional political party or president is exempt. The final straw in this organized abuse was when President Leonel Fernández gives the official business concession to Luz y Fuerza in 2011 DESPITE ALL COMPLAINTS AGAINST Orsini Bosch. Danilo Medina has not been any different, barely a few months ago he came to LT and said there’s a contract, I can’t do anything. Yes, there’s a contract, one that has been breached multiple times by the company, committing violations that warrant an end to the electrical concession. Such Presidential statement borders on the immoral. How is it possible that the president has not been informed of such violations ? Why not ask for a legal review of the contract just as he did with Barrick Gold’s ? Do citizens in Las Terrenas may have no claims to a just cost of electricity ?

What political entanglements and inmoral morrings prevent President Medina from doing what’s never been done in Las Terrenas ? How is it possible that in addition to the President, or the Senator or the Diputados, or the governor, or the Mayor, or the city council people, or the SIE or the Energy Commission, no one seems to be able to get a hold of this embarrassing issue, one that is clearly unjust, illegal and one that violates the rights of Dominican and foreign residents in this town of 25,000 people ?

If Danilo does not answer, it will be impossible to determine what might happen in Las Terrenas.