All about the noni

Description, nutritional benefits and cosmetic virtues of the noni 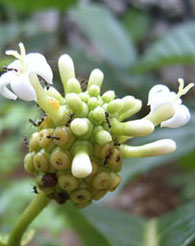 Noni is the name given to both the tropical tree and the fruit coming from Asia orAustralia.
The tree high is between three and six meters.

It grows in the tropical climates as the Dominican Republic, and the fruit is recognizable, when it’s ripe, to its yellow-green or white color and its strong smell.

Characterized by its bitter-tasting, it would contain many natural vitamins (as the vitamin C), minerals, trace-elements, enzymes, alkaloids, vegetal sterols… which makes it a unique fruit.

A lot of virtues are credited to the noni, that, according to Americans researchers, contains immuno stimulating substances that could protect the organism against the degenerative illness of cancer and delay ageing.

Indeed, it would strengthen the immune system, and would solidify the natural defenses of the body and the infections at the same time it could be a very potent antioxidant.

As it contains bromelina, it would help the body to throw away the harmful free radicals and, consequently, increase the energy levels.
It would help to the good functioning of the digestive system by acting as an acidity stabilizer between others, and could have positives effects on hair and skin too. 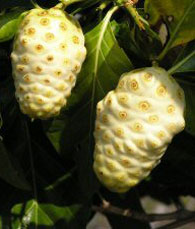 From a psychic point, it would improve mental acuity as well as the concentration’s levels. The traditional healers would use, until today and in the whole world, the different parts of the tree (leaves, flowers, bark, roots and juice) to resolve varied health problems:

However, the noni juice virtues are controversial.

The European Union did not give it the pharmaceutical mention, even if the selling of the noni juice or pills is allowed.

At the same time, the noni juice is sold as an alimentary complement in theUSA, where it’s not officially recognized as a medicine.